If you’re new to TouchDesigner, it’s easy to feel like DATs are a hard nut to crack. This is especially true if you’re also new to programming in general. Scripting can be daunting as you’re getting started, but it’s also incredibly important – take it from someone who is still learning, dat by dat.

So what’s the big deal about DATs anyway? Better yet, why should you care? DATs can help in all sorts of ways, but lets look at a concrete example of how they can help solve some interesting problems that you might face if you’re out to save some information to use later.

As the Wonder Dome team has been busy building interfaces, programming methods, and performance tools we’ve hit countless situations where being able to save some data for later use is absolutely necessary.

Our lighting designer, Adam Vachon, wants to be able to mix color live during a rehearsal and then record that mix to in a cue later. Better yet, he might want to create a cue sheet with all of that data saved in a single table so he can quickly recall it during tech. Over in media, we want to be able to place video content in lots of difference places across the dome and with varying degrees of visual effects applied and we also want to be able to record that data for later recall.

DATs, are a wonderful solution for this particular problem. With a few DATs, and some simple scripts we can hold onto the position of our sliders to use later. Let’s take a look at how we can make that happen.

First let’s look at a simple problem. I want to be able to add the values from one table to the bottom of another table. If you’re new to programming, this process is called appending. We can see an example of this if we look at two different tables that we want to add together. 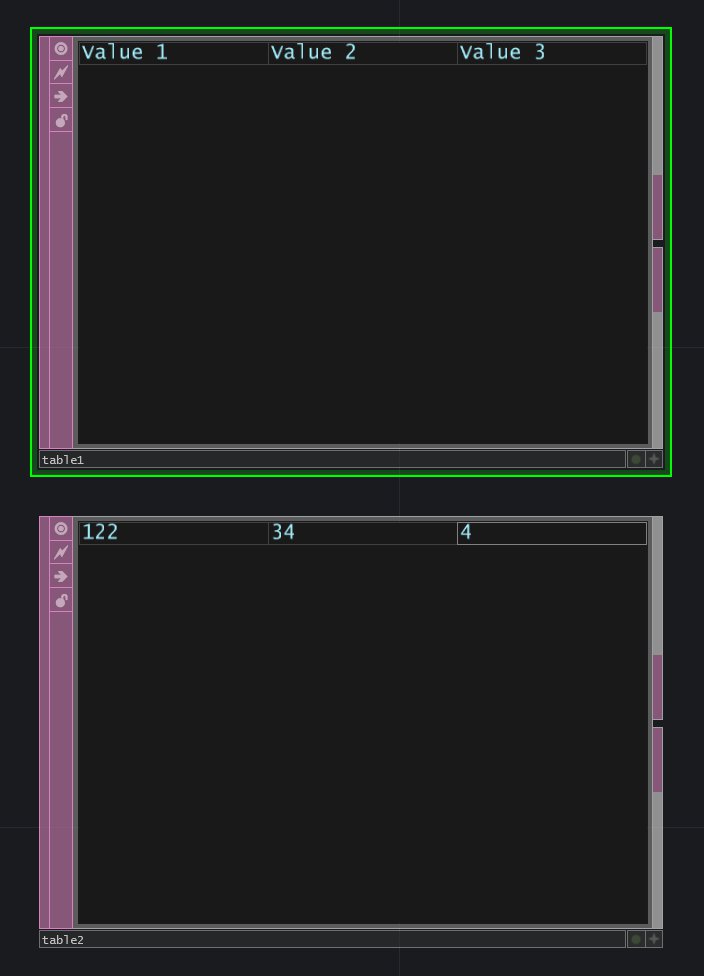 Here we have two tables, and we’d like to combine them. We can do this by writing a simple script that tells TouchDesigner to take the contents of cells from table2 and to add them to table1 in a specific order. One of the things that’s important to understand is how tables are referenced in TouchDesigner. One of the ways that a programmer can pull information from a cell is to ask for the data by referencing the address of the cell. This is just like writing a formula in something Google Spreadsheets or Excel – you just need to know the name of the cell that you want information from. Let’s take a look at how the addressing system works: 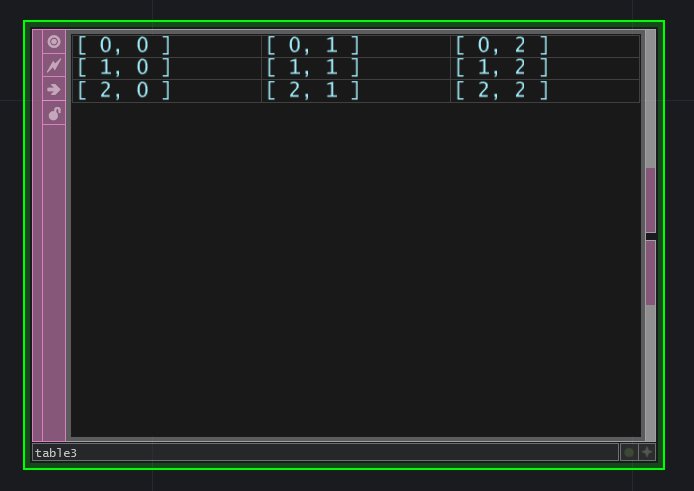 Taking a moment to study table3 and you’ll be referencing cells in a flash. It’s just rows and columns, with the only catch that the numbering system starts at 0. Cool, right? Okay, so if we want to write our script to append cells from one table to another we’re going to use this format:

So what’s happening here? First we’re defining table1 as a variable we’re calling n. Next we’re naming three new variables m1, m2, and m3. These correspond to the data in the first row of table2, in column 1, 2, 3. The next operation in our script to append n (that’s table1) with a new row using the values m1, m2, and m3 in that order. You might decide that you want these added to n in a different order, which is easy, right? All you have to do is to change the order that you’ve listed them – try making the order of variables in the brackets [ m2, m1, m3 ] instead to see what happens. Alright, at this point our network should look like this:

Now, to run our script we’re just going to right click on text3, and select “Run Script” from the contextual menu.

Great! Now we’ve successfully appended one table with data from the first row of another table.

If you’re still with me, now we can start to make the real magic happen. Once we understand how a script like this works, we can put it to work to do some interesting tasks for us. Let’s look at a simple example where we have three sliders, that we want to be able to save the data from. 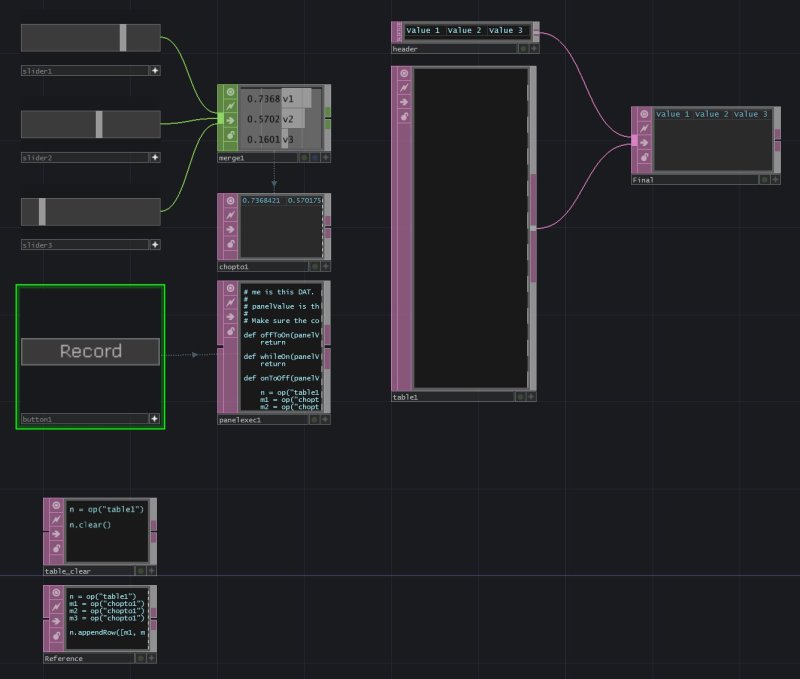 To get started, let’s make three slider COMPs, and connect them to a merge CHOP. 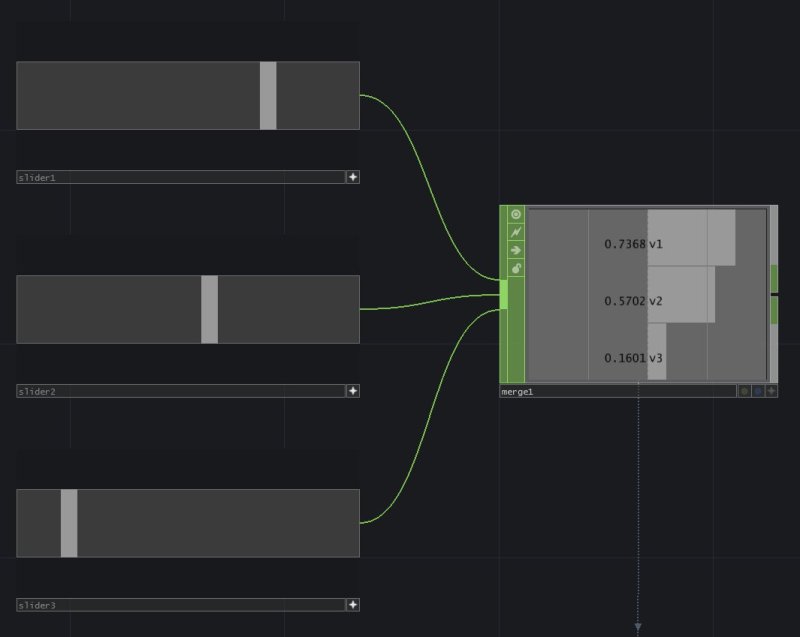 Now lets add a Chop to DAT, and export the merge to the Chop to.

The chopto DAT is a special kind of operator that allows us to see CHOP data in DAT format. This coverts our CHOP into a table of three floats. At this point you can probably guess where we’re headed – we’re going to use our simple script that we just wrote to append the contents of our chopto to another table. Before we get there, we still need to get a few more ducks in a row.

Next let’s create a table with one row and three columns. Name these columns anything you want, in my case I’m going to call them (rather generically) Value 1, Value 2, and Value 3. I’m also going to create a big empty table, and finally I’m going to connect both of these with a merge DAT. Why two tables? I want my first table to hold my header information for the final table. This way I can clear the whole table of saved floats without also deleting the first row of my final table. 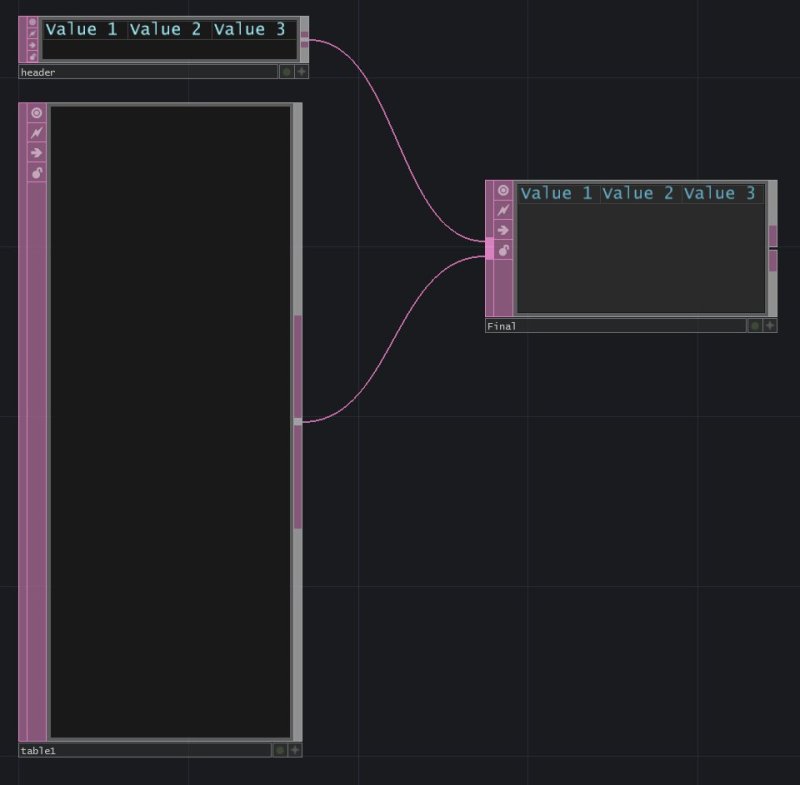 As a quick reminder, the names of your DATs is going to be very important when we start to write our script. The names of our DATs is how we can identify them, and consequently how we can point TouchDesigner to the data that we want to use.

Alright, now it’s time for DAT table magic. At this point you can make your sliders and button viewer active, and you’re ready to make changes and then record slider states. Happy appending.

In case you still have questions you can take a closer look at my example here – record_method_example.