The other day I posted look at how to send and receive TouchOSC data with Troikatronix’s Isadora. In an effort to diversify my programming background I’m often curious about how to translate a given task from one programing environment to another. To this end, I was curious about repeating this same action in Derivative’s TouchDesigner. If you’re one of a growing number of artists interested in visual programming, VJing, media design, interactive system design, media installation, or media for live performance than it’s well worth your time to look at both Isadora and TouchDesigner.

That said, I initially started thinking about control panel interfaces for TouchOSC when I saw Graham Thorne’s instructional videos about how to transmit data from Isadora to Touch OSC (If you have a chance take a look at his posts here: Part 1 & Part 2). Last year I used TouchOSC accelerometer data to drive an installation at Bragg’s Pie Factory in Downtown Phoenix, but I didn’t do much with actual control panels. Receiving data from TouchOSC in TouchDesigner is a piece of cake, but sending it back out again didn’t work the first time that I tried it. To be fair, I did only spend about 3 minutes trying to solve this particular question as it was a rather fleeting thought while working on another project.

Getting this to working Isadora, however, gave me a renewed sense of focus and determination, so with a little bit of experimenting I finally got this working the way that I wanted. While there are any number of things you might do with TouchDesigner and TouchOSC, I wanted to start with a simple deliverable: I wanted the position of Slider 1 to inversely change the position of Slider 2, and vise versa. In this way, moving Slider 1 up moves Slider 2 down, and moving Slider 2 up moves Slider 1 down. In performance setting it’s unlikely that I’d need something this simple, but for the sake of testing an idea this seemed like it would give me the kind of information that I might need.

For the most part this is pretty easy, but there are a few things to watch for in order to get the results that you want.

Derivative Documentation on the OSC In CHOP

The OSC in CHOP is pretty excellent out the gate. We need to do a little configuring to get this up and running, but after that we’re truly off to the races. First off it’s important to make sure that your TouchOSC device is connected to your network and broadcasting to your TouchDesigner machine. If this process is new to you it’s worth taking a little time to read about out to set this all up – start on this page if this is new to you. Once your TouchOSC device is talking to your TouchDesigner network we’re ready to start making magic happen. One of the first things that I did was to activate (just adjust up or down) the two faders that I wanted to work with. This made sure that their IDs were sent to TouchDesigner, making it much easier for me to determine how I was going to rename in them in the future.

Derivative Documentation on the Select CHOP

When you’re working with the OSC In CHOP, all of your TouchOSC data comes through a single pipe. One of the first things to do here is to use the select CHOP to single out the signal that you’re looking for (as a note, you could also export the Channel in question to a Null, or handle this a variety of other ways – in my case a Select CHOP was just the first method I tried). This operator allows you to pull out a single Channel from your OSC In. 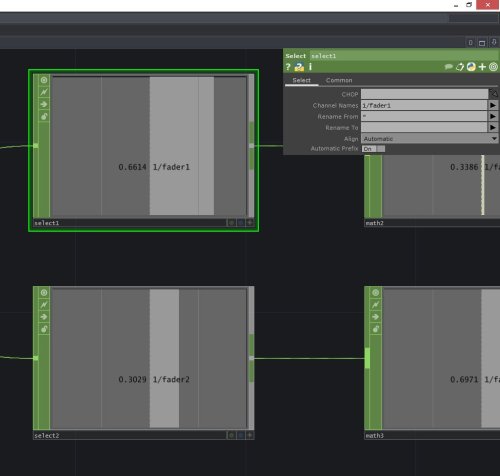 Derivative Documentation on the Math CHOP

Next I wanted to remap the values of my incoming signal to be inverted. A Math CHOP lets us quickly remap the range for our data by changing a few values in the Range Tab of that parameters window. You’ll notice that you first need to specify the from range (what’s the range of incoming values), and then specify the to range (what’s the range of outgoing values). In my case, the from values are 0 and 1, and the to values are 1 and 0.

Derivative Documentation on the Rename CHOP

The Rename CHOP is one of the most important steps in your whole network. When communicating with TouchOSC you need to know exactly what object you’re trying to drive with your data. To accomplish this you need to know the UDP address of your device, the port number that you’re board casting to, and the name of the slider or button that you’re wanting to change. While we can specify the UPD address and port number with another CHOP, we need to use the Rename CHOP (a quick aside – there are, of course, other ways to do this – this just happens to be the method that I got working after a bit of trial and error) to specify the name of the object that we’re driving. In my case I wanted fader 1 to drive fader 2. You’ll notice that formatting of the fader is important. In this particular OSC layout there are multiple tabs. We can see this as evidenced by the “1/” preceding the name of our fader. In changing the name of this input we need to enter the precise name of the fader that we want to change – this is why we activated both faders initially, this gave us the names of both objects in the TouchOSC panel. You’ll notice that changed the name of my fader to “1/fader2”. 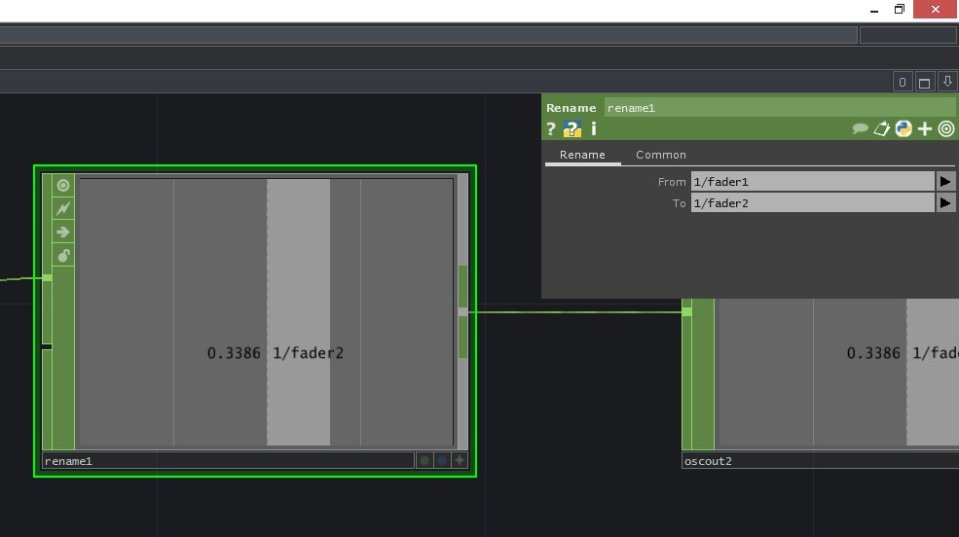 Derivative Documentation on the OSC Out CHOP

Now that we’ve processed and named our signal we’re ready to send it back out to TouchOSC. In this CHOP we need to input the UDP address of the TouchOSC device (you can find this in the info tab of the TouchOSC app) as well as the port that we’re sending to. We also want to make sure that we’re sending this as a sample, and finally we want to turn off “send events every cook.” This last step is important because it ensures that we’re only sending values when they change. If we send messages for every cook we won’t be able to see the inverse relationship between our two sliders. Correction, we’ll be able to see the relationship so long as we don’t set up slider 2 to drive slider 1. In order to create an inverse relationship with both sliders we only want to transmit data as it’s changed (otherwise we’ll find that we’re fighting with the constantly streamed position data from our slider that isn’t being activated). 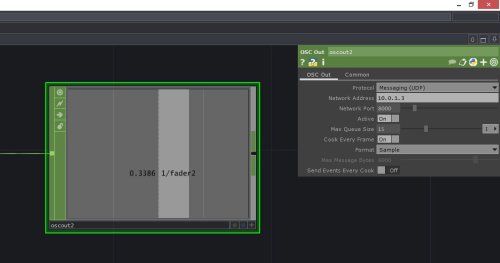 The last step in this process is to copy the whole string and set up fader 2 to transmit to fader 1, this last step allows both faders to drive one another in turn.

There you have it. You’ve now successfully configured your TouchDesigner network to receive and send data to a mobile device running TouchOSC.

2 thoughts on “Sending and Receiving OSC Values with TouchDesigner”