Not all of the work of media design is sexy. In fact, for all of the excitement generated by flash of stunning video, interactive installations, and large scale projection there is a tremendous amount of planning and paper work involved in the process. In the case of a theatrical project, one of the designer’s crucial pieces of work comes in the form of creating a cue sheet. For the uninitiated, a cue sheet is a list of all of the moments in a show that contain media. These documents help the designer, stage manager, and director establish a common understanding about how media / lights / sound are going to be used in a given production.

Drafting a useful cue sheet is often more a matter of preference, but it warrants mentioning some things that can help the media designer get organized as she / he wrestles with a growing list of content to generate. While one could certainly use a word-processing program in order to generate a cue sheet, I prefer to working a spreadsheet. Excel or Google Spreadsheets are a fine medium for writing cues, and have features that can be extremely helpful.

In my opinion there are a few must-have columns in organizing your cue sheet:

The Cue – Whatever you’ve settled on using, numbers or letters or some combination of the two, you need a column that puts the cue name / number in plain sight.

The Page Number – If you’re working from a traditional script, keep track of the page number. At some point you’ll be struggling to find the place in the script where a particular cue is getting called, and knowing the page number can ensure that you stay organized in the planning and technical rehearsal process.

Duration – How long does the cue last? In talking with the director it’s important to have a shared understanding of what’s happening in a given moment in a production. Specifying how long a particular effect or video is going to last can help provide some clarity for the designer as she/he is editing, animating, or programming.

From the Script – What’s in the source material that’s driving you to design a particular look? Did a character say something in particular? Is there any stage direction that’s inspiring your choice? Having a quick reference to what’s inspiring you can be a godsend while you’re crafting the content for a production.

Notes – For all that times you say “I’ll remember,” you will invariably forget something. Write it down. Did the director say something inspiring? Write it down. Did the lighting designer mention something about the amount of ambient light during a particular moment? Write it down. Write down what you’re thinking, or brainstorming. You’re never obligated to keep anything, but having a record of what you’ve been thinking gives you something to start from when you sit down to edit / animate / program.

Shooting Notes – If you’re going to need to record video for a production, make note of what particulars you need to keep in mind at the shoot. Do you need a green screen? A particular lighting effect? A particular costume? Keeping track of what you need for a particular moment is going to make the filming process that much easier.

Checklists. At the end of my cue sheet I keep a checklist for each cue. Three columns that help me keep track of what work I’ve done, and what work is left to be done.

Working with a Spreadsheet

One of the truly magical parts of working with a spreadsheet is one’s ability to use simple formulas to automate a workflow. A simple example comes out of the show that I’m currently working on, The Fall of the House of Escher. A new work that’s come out of the collaborate process of the 2014 ASU Graduate Acting / Directing / Design cohort, this show is built around a structural focus on giving the audience as much agency as possible. Central to this endeavor is a choose-your-own-adventure model for a the production. Given this structure, our production has sections that are distinguished from another another by a alpha-numeric prefix – 1A, 2A, 3A, et cetera. Additionally, I want to pair the section code with the number of a particular cue. This, for example, might look like 3A-34 (section 3A, cue 34). This combination of letters and numbers could make renumber cues, should one change, a difficult process. To simplify this particular problem I can use a simple formula for combining the contents of columns. 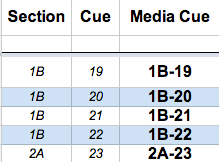 First I start by creating separate columns for the section of the show, and the cue number. Next I created a third column intended to be a combination of these other two columns. Here I inserts the following formula: =A24&”-“&B24

Here the Google Spreadsheets (or Excel for that matter) will read this formula as: display the contents of cell A24 and insert a “-” symbol and take the contents of cell B24. This may not seem like a big deal until you consider the time saved when a cue is added or removed, forcing a change in the numbering convention of all the following cues.

Conditional formatting largely comes in varieties that are relative to changing the background of a particular cell. In this case Excel has a much wider range of possibilities for this kind of implementation. For me, however, the simplicity of automatic color coding is tremendously helpful. For example, let’s consider the final three checklist categories that I talked about earlier. Let’s say that I want every cell that contains the word “No” to be color coded red. In order to achieve this look first I’d highlight the cells that I want the formula to apply to.

Next I’d click on the background formatting button in the toolbar and select “Conditional Formatting” from the bottom of the list.

Finally I’d write my simple formula to control the change of color for the Cell’s selected.

Last by not least, maintaining multiple tabs on a worksheet saves time and organizational energy. Additionally this allows you to cross reference notes, cells, and thoughts in your workbook. You might, for example, maintain a working cue sheet where you can brain storm some ideas and be a little less tidy. You can then use simple reference formulas to pull the relevant data to your final cue sheet that you give to the Stage Manager. Should you have the good fortune of having an assistant, you might make a separate page in your work book to outline her/his responsibilities on a project.

A cleanly organized cue-sheet is far from exciting, but it does ensure that you stay focused and productive as you work.